The Illiterate Of The 21st Century 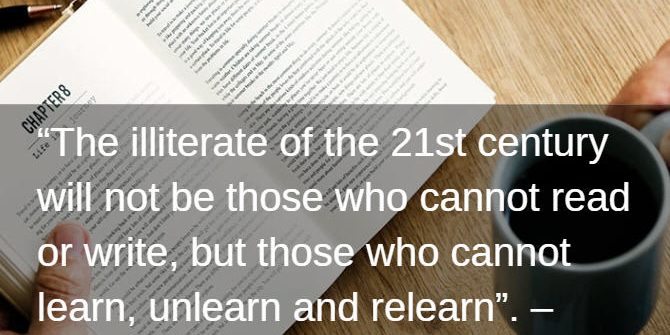 “Never let formal education get in the way of your learning.” – Mark Twain.

Unlearning is the toughest one of the tasks Toffler mentions. With unlearning you’re on your own. There aren’t any unlearning schools, no teachers, never mind unlearning courses at school. You face the tough challenge of not knowing what you need to unlearn or even how to unlearn.

“The world we have created is a product of our thinking; it cannot be changed without changing our thinking.” – Albert Einstein

“We cannot solve our problems with the same thinking we used when we created them.” – Albert Einstein

“For the first time in history it is now possible to take care of everybody at a higher standard of living than any have ever known. Only ten years ago the ‘more with less’ technology reached the point where this could be done. All humanity now has the option to become enduringly successful.”– R. Buckminster Fuller, 1980

“It is difficult to get a man to understand something when his salary depends upon his not understanding it.” – Upton Sinclair. (I, Candidate for Governor: And How I Got Licked (1935)

“The cure for boredom is curiosity. There is no cure for curiosity.” – Dorothy Parker

“If they can get you asking the wrong questions, they don’t have to worry about answers” – Thomas Pynchon

“The important thing is not to stop questioning.” — Albert Einstein

‘“How do I know what I think until I see what I say.”—C.K. Chesterton

“Don’t climb the ladder of success only to later find it was leaning against the wrong wall.” – Attributed to Joseph Campbell

“There comes a time when the mind takes a higher plane of knowledge but can never prove how it got there.” – Albert Einstein

“He who joyfully marches in rank and file has already earned my contempt. He has been given a large brain by mistake, since for him the spinal cord would suffice.” – Albert Einstein

“Now he has departed from this strange world a little ahead of me. That means nothing. People like us, who believe in physics, know that the distinction between past, present, and future is only a stubbornly persistent illusion.” – Albert Einstein

“One should guard against preaching to young people success in the customary form as the main aim in life. The most important motive for work in school and in life is pleasure in work, pleasure in its result, and the knowledge of the value of the result to the community.” – Albert Einstein

“I am enough of an artist to draw freely upon my imagination. Imagination is more important than knowledge. Knowledge is limited. Imagination encircles the world.” – Albert Einstein

“If humanity does not opt for integrity we are through completely. It is absolutely touch and go. Each one of us could make the difference.” – R. Buckminster Fuller

“People should think things out fresh and not just accept conventional terms and the conventional way of doing things.” – R. Buckminster Fuller

“Space and time are modes by which we think, not conditions under which we live.” – Albert Einstein

“Time — the time that we know through clocks and calendars–was invented.” – Encyclopedia Britannica

Other quotes to live by?

let me know your favorites

Contracting Is Vital; Legal Contracts Are Not
September 20, 2019
ARTICLES OF INTEREST
ANY QUESTIONS? GET IN TOUCH!
Please fill out the form below and an our expert will be in touch shortly.
Go to Top