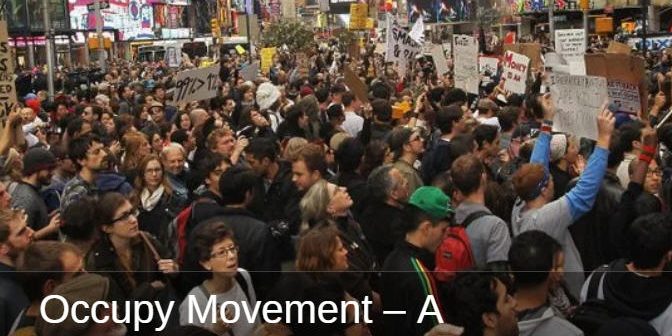 The greatest revolution of our generation is the discovery that human beings, by changing the inner attitudes of their minds, can change the outer aspects of their lives.” – William James (1842-1910)

The Occupy   movement of 2011 began in the US and yet people all around the world have joined in to protest corruption and greed. It has become a worldwide awakening – people all around the earth have woken up and have no intention to be hushed. Looking deeper into the focus of the movement, the discussion here is about how each of us internalizes what we have believed in the past, why we believed such and how these beliefs evolved and maybe most important – to think twice whether our beliefs continue to serve us. The perspective given focus here is more spiritual than political, a philosophical view that might resonate best with those who digest the ‘law of attraction’ and who seek the silver lining of it all, to find peace amidst chaos within their own souls. It’s a perspective that might take awhile for one to wrap their brain around and yet finding peace within by doing the inner work of soul-searching might just be the foundation for positive change,  it might just be the evolution and transformation that matters MOST!

ROBERT B. REICH is Chancellor’s Professor of Public Policy at the University of California at Berkeley and Senior Fellow at the Blum Center for Developing Economies
How OWS is changing public debate in America. http://t.co/6Ou94Kf2

An Energy Shift Toward Positive Evolution!

Maybe you might have searched for deeper meaning, or for ways to contribute to the movement without becoming depressed and resentful about the entire mess. A major turning point in that search for this author appeared in this very important film featured below, a documentary released in September of 2011 and originating in Canada.The messages   in this incredible film focus around our personal beliefs and how they were formed as we mature. The significance to happenings in the world has to do with our inner beliefs having a strong energy vibration. As those beliefs evolve we may then connect and evolve along with the collective vibrations of beliefs of others in the evolution of our earth as we create a “Collective Evolution” .

Consider this brilliant perspective and the potential impact on world change.

Not ‘Occupy Wall Street’ but “Occupy Self”

Inner Changes as a Foundation for Outer Change

Consider that instead of making outside changes first, we have the ability to make inner changes that ultimately will effect outer changes. Could it be that the power of this movement and worldwide shift is actually powered mainly by a ‘tipping point’ of awakening and enlightenment around the earth? Could the foundation of the movement be more about a qualitative change that is powered by inner personal changes and inspiration as a result of a collective momentum created by vibrations of evolution of worldwide thought?

The external changes we’re seeing are a result of the inner awakening of millions of people all over the world. Everything we see without is a projection of the inner world we each create for ourselves. What’s the difference between a personal projection and a collective projection? Let’s explore!

Do You Believe Everything You Think?

Those who still follow only mainstream  media channels for news may not realize that media itself is a huge part of the corruption and control. This is not to point blame on media itself, as most likely many media personnel are simply doing their jobs and following orders, regardless of personal beliefs. Our mainstream media channels are controlled by corporations and Wall Street, and the same goes for the NYPD officers who patrol Wall Street. While some of the NYPD have indeed acted in an atrocious manner, all were there initially to follow orders, to do their jobs.You are encouraged then, to close off mainstream media for awhile…at least put it on the back burner while you take the time to do the inner work and then… to re-think each belief from your own heart and mind. This is not about anyone dictating WHAT to think but HOW to think. It’s about shutting off the outer noise long enough to do some deep self introspection about WHY we believe what we do, and then consider whether changes are overdue.
We were all molded, now break free and create your OWN beliefs!

Contracting Is Vital; Legal Contracts Are Not
September 20, 2019
ARTICLES OF INTEREST
ANY QUESTIONS? GET IN TOUCH!
Please fill out the form below and an our expert will be in touch shortly.
Go to Top